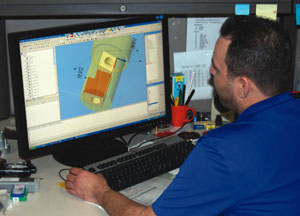 Holmatro, Inc. is an international manufacturer of rescue equipment—such as hydraulic spreaders, cutters, rams and more—used to extricate those pinned within vehicles after car accidents. “If I gave you one word that says what we do best, that word would be innovation,” says Chuck Cain, manufacturing engineer, a 17-year Holmatro veteran based at the company’s Glen Burnie, Maryland, facility. “We’re always investing in research and development and finding ways to make better products. Innovation is fun for me, and it all comes down to having the right tools for the job.” It should come as no surprise, then, that the 44-year old company has made a practice of seeking the cutting edge in both machine tools and computer-aided-manufacturing (CAM) software.

Holmatro acquired ESPRIT® CAM by DP Technology in 1998 specifically to program its newly acquired Mori Seiki DL15 mill-turn machine tool. The company chose ESPRIT after it placed each potential solution under the microscope for a hard look at which would best suit its needs. “You name the players, and they were all here,” Cain says. “ESPRIT, without a doubt, did the best. We wanted someone strong in multitasking because no one seemed to be strong in it.”

Because multitasking machining continues to change the face of modern manufacturing, it’s clear that Holmatro was ahead of the game with its investment in advanced technology. Just as the new Mori Seiki machine tool made more sophisticated and efficient methods of machining possible, the new software meant that Holmatro was no longer limited to programming its machine tools longhand, at the control.

It also wanted every part in its four-sided tombstone to have its own work coordinate. Today, the company is a predominantly mill-turn shop with a roster of tools that includes five multitasking machines, a handful of lathes, and horizontal and vertical machining centers. Although Holmatro’s American site employs about 50 personnel, the company’s staff abroad—including those based in Holland and Poland—includes nearly 250 members. Ninety-seven percent of the company’s parts are produced in the United States.

Although the parts made by Holmatro are easily defined as “complex,” the fact that many are hydraulic compounds makes them especially complex. About ten of the company’s 40 to 50 standard-but-continuously-evolving parts must hold a couple of microns true position—which is equal to about one one-hundredth of a human hair’s size in tolerance.

“The finishes have to be good because, when you’re dealing with hydraulic fluid, everything has to be precise,” Cain says. “Our pumps flow at 10,500 pounds psi. If you get a line on a bore and it’s a bore for a hydraulic cylinder, it’s trouble.” It’s also worth noting that most of Holmatro’s 40 to 50 products are composed of 40 to 50 smaller parts. Hydraulic pumps alone, Cain notes, require more than 60 pieces.

High-precision parts designed on site and manufactured in short runs—nothing more than 500 pieces—are Holmatro’s specialty. Parts are typically made in aluminum and nickel chrome molybdenum, and not in harder metals such as hastelloys, waspaloys and titanium.

When programming a part designed right there at Holmatro, Cain faithfully uses the automatic feature recognition function within ESPRIT, which means that the software automatically defines features on the solid model to be machined. Cain also uses ESPRIT FX, or ESPRIT’s CAD-to-CAM data exchange, to ensure that the properties designed on the solid model are being effectively recognized within the CAM system. “With this, you aren’t smashing the solid as much, so it’s a time saver,” Cain says. “ESPRIT changed the way we do a lot of things.”

“Smashing a solid” can be defined as taking a given solid model and extracting its surfaces, wireframe or points. This function is used for creating manufacturing features, particularly when the part geometry is especially complex.

Cain uses the ESPRIT FX plugin for his SolidWorks® computer-aided-design (CAD) software, which generates the features for ESPRIT. When the solid model is imported into ESPRIT, there is no need to smash the solid for geometry. Furthermore, the original SolidWorks Feature Tree is displayed directly inside of the ESPRIT user interface, including the complete original design intent — features, tolerances, material properties, surface finishes, administrative data, etc.

Cain recalls a particular pump coupling adapter that was milled on a horizontal machining center (HMC) that, with the addition of ESPRIT and the new machine tool, became a mill-turn part that ran unattended on a horizontal machine each night and day for a total of 32 pieces in 24 hours. “The vice president came to me and asked if there was a way that I could make those parts faster,” Cain says. “I said, ‘Not unless I start using more fixtures on this horizontal.’ He wanted me to cut the machining time in half, to get the 300-piece runs done in three and a half days instead of seven.”

To meet the challenge, Cain reprogrammed the part as a lathe part using round bar stock, programmed with nine work planes in ESPRIT, and purchased a soft collet for the second, milling, operation. “ESPRIT made this easier to do because of the complex code generated when integrating the milling and turning operations,” he says. “In this case, we also utilized what would have been a fourth axis to do the A-axis index machining.”

Using this new system, 32 of the parts could be produced during the day and 95 could be produced, unattended, at night, resulting in a cycle time that was reduced by three minutes and an overall 296 percent increase in production. “We like to get things ‘Done in one,’ ” Cain says. “You don’t want to touch a part more than one time—ever. With less part handling, more automation, and fewer operations, we improved efficiency, accuracy, and throughput.”

When the ultimate task at hand is saving lives, however, efficiency on the job has a whole new meaning. “We always want to make sure we provide whatever our customers want and to evolve better ways to rescue people.”

For for more information, visit www.dptechnology.com.