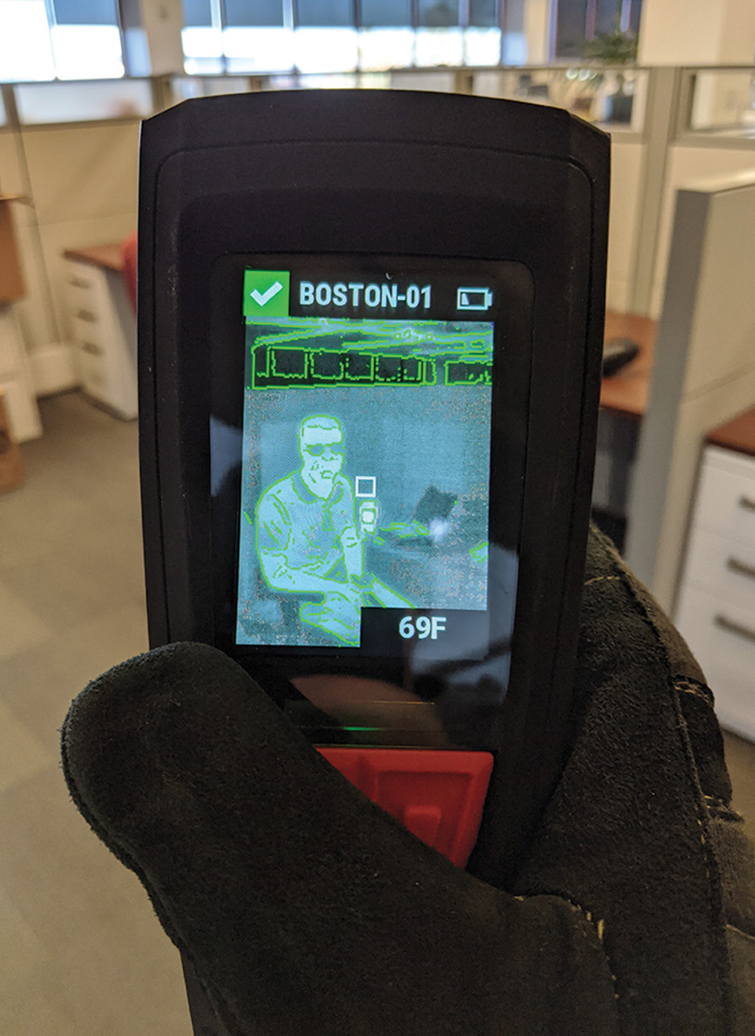 At FDIC International 2019, I visited the MSA exhibit and saw a presentation covering a new product: LUNAR. It was very interesting. Little did I know that six months later I would be observing a field trial of the device!

On October 15, 2019, MSA, with the assistance of the Boston (MA) Fire Department (BFD), conducted field tests on its newest product designed to assist in the ongoing goal of increasing firefighter safety and survival. This device is called LUNAR and it is a standalone, cloud-based unit using a combination of WiFi and LTE wireless communications technologies to deliver constant tracking, monitoring, and accountability of a firefighter when activated. The product is unlike anything I have ever seen or was aware of in the fire service.

“Accounting for all firefighters on a fireground has been a consistent need expressed by the fire service profession, but it’s also been a challenge for many manufacturers to solve,” said Jason Traynor, general manager of global respiratory protection and fire helmets for MSA. “When we looked at what we could do to enhance firefighter safety, we listened to feedback from thousands of firefighters. We then took those insights and used a holistic approach to build a connected ecosystem of products where the sum of the individual components is the key to keeping firefighters better connected—and safer—than ever before.”

According to Traynor, the introduction of LUNAR—and the potential it represents—delivers on the vision of having the company’s G1 self-contained breathing apparatus (SCBA) serve as a flexible platform for the future. “When we introduced the G1 SCBA in 2014, we did so with the goal of making it adaptable to new technology as soon as it becomes available, which, in turn, raises the level of firefighter safety on a continuous and rolling basis,” comments Traynor. “LUNAR and our Connected Firefighter platform are great examples of how we’ve continued to invest in R&D and technology to make this vision a reality.”

LUNAR has many features that are unique. To begin with, the device has three primary significant features: a built-in thermal imaging camera (TIC), search and rescue technology, and always-on connectivity. The LUNAR device is a standalone unit, compact, and easy to use. MSA promotes it to be for “all users,” meaning it can be a part of the MSA G1 SCBA or any other SCBA regardless of brand. The user can purchase it as a standalone unit for his SCBA or even for those firefighters not wearing an SCBA.

2 Every firefighter received one-on-one instruction on how to use the LUNAR devices before they entered the burn building. (Photos by author unless otherwise noted.)

3 The BFD facility provided a good test for the LUNAR’s range with the building’s concrete block construction. “Down” firefighters did not stage out in the open, and the companies had to work together, using both skills and technology.

On arrival, once the firefighter turns the device on, he is connected via WiFi. The connection starts transmitting his status immediately both to other on-scene personnel (unit to unit) and to the MSA Cloud, created especially for LUNAR via LTE technology, for additional sites such as a dispatch center/fire alarm or a remote incident command post. It does not require additional things like base stations or routers. The technology it offers is standalone and ready to go to work! LUNAR can play a huge role in accountability and safety. On scene, with all personnel wearing the device regardless of if they are wearing an SCBA or not, we have full accountability of who is on scene. LUNAR’s proprietary technology keeps firefighters connected in a broad range of ways.

Beyond all the technology, the features that I personally found very exciting were:

4 The MSA Cloud software engineers from MSA went over how the software would be tracking the GPS location of all firefighters wearing a LUNAR device. The engineers stayed with the incident commander throughout each evolution, helping him to monitor and observe.

5 With “Edge Detection,” the TIC can outline the edges of wherever there are temperature changes. This means that while you move through a building, the windows and doors will not only appear as color (temperature) change, but the actual outline of the door and window will be seen. (Photo courtesy of MSA.)

The trials were conducted on Moon Island, the BFD’s training facility. The BFD provided three companies in the morning and three in the afternoon. MSA provided numerous people involved in the design and capabilities of the product. They were there for three reasons: to teach how to use it, to observe how the use in the trial went, and to learn. The trial began with the entire group of firefighters listening to a presentation on what LUNAR is, how it is used, and how it can be of benefit. The group was then broken back into its own companies. Each company conducted its own trial. Before each trial, numerous MSA personnel met with company members and conducted one-on-one instruction on how to use the device. All questions were answered to ensure that all were comfortable with how to use it. The actual use, I observed, was easy and simple. The device was secured to the left shoulder strap of the firefighter’s SCBA (MSA G-1) in preparation for the evolution.

In addition to the search/RIT company, an officer and aide were designated as incident command. The MSA Cloud software engineers from MSA went over how the software would be tracking the GPS location of all firefighters wearing a LUNAR device. The engineers stayed with the incident commander throughout each evolution, helping monitor and observe. Each device is initialized or registered to a specific user, so you are not monitoring a unit but rather an individual by name or company designation. If the user is also wearing an MSA G1 SCBA, it also monitors air status and time.

A firefighter was placed in the building in the role of the down firefighter. The building was shut tight, leaving zero visibility. Upon instruction, the LUNAR device was activated into distress mode. The “RIT company” assigned made entry on air and fully geared up and began the search using both the person-to-person ranging and the personal TIC. Even though they had this technology, they still maintained the use of basic search skills—wall contact, working together, etc. The “down firefighter” was not placed out in the open, easy to find, and the companies had to work together, using both skills and technology. All the evolutions placed the “down firefighter” in a different location, and all crews were successful in locating the missing firefighter using the LUNAR’s ranging and TIC.

After each evolution, MSA representatives led a group discussion, asking what firefighters thought, how it went, does the LUNAR help, and so forth. Watching and listening, I observed that the firefighters all said it would be “very helpful” in a real search for a firefighter. The TIC and the edge detection it provides were very well received by members who used it. In general, the response was very favorable. As with anything new, it was the consensus of both BFD members and the MSA staff that training and hands-on experience will make the product a powerful tool.

According to MSA, LUNAR will be available in 2020.

JOE NEDDER was an on-call firefighter in various departments for more than 36 years and has served in various ranks. He retired from the Uxbridge (MA) Fire Department in 2013. He has been involved in training for more than 27 years and instructed for the Massachusetts Firefighting Academy for 16 years and at FDIC International from 2010 to 2018. Nedder has written for Fire Engineering and is the founder and lead instructor of Cross St. Associates, a fire service training company. He is also the author of Rapid Intervention Crews (Jones and Bartlett).