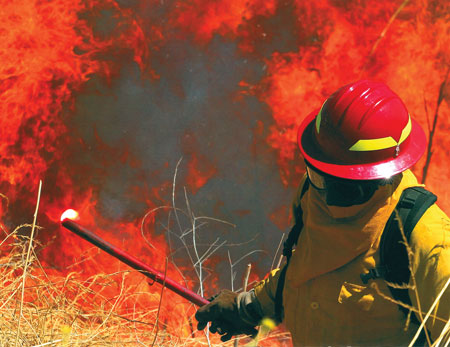 Wildland firefighters represent a unique group of men and women who battle wildfires without the use of a fire truck filled with equipment.

Fighting these types of fires, which often spread across thousands of acres, requires many years of training, practice, and dedication. It takes a special person to work under such rigid conditions where smoke can be seen for miles and hiking over rugged terrain is a requirement of the job.

Just a few months ago, a fire started in a trailer park in Fort McMurray, Canada, and spread quickly into the forest surrounding the city, forcing more than 80,000 people to evacuate their homes. The high temperatures, low humidity, and strong winds caused this fire to spread quickly to the nearby forest, creating dangerous firefighting conditions. Every year, we see video footage on the nightly news of firefighters battling wildfires that burn thousands of acres across the United States and force residents from their homes, calling on wildland firefighters to battle these fires.

A friend of mine is a wildland firefighter in Texas and has battled some of the worst wildland fires Texas has seen. Some of you might remember the Texas wildland fire of 2010-2011 that has been recorded as the worst in the state’s history. My friend was one of the 16,000 wildland firefighters who battled this particular fire. When he talks about battling wildfires, he talks of fires that have raged for more than a year, burned 9.3 million acres, destroyed 3,000 homes, and displaced 5,000 people. I realize that we live in completely different worlds as firefighters.

I have the utmost respect for the men and women who courageously and proudly battle wildfires. As structural firefighters, my crew and I can contain a fire in a few hours; wildland firefighters cannot. During the Texas wildfire, my friend was part of the initial attack crew that battled the fire for 30 hours. After just 15 hours of rest, less than a day, his crew was back on the job.

Let’s take a look at how thermal imaging cameras (TICs) might help the wildland firefighter safely navigate through thick smoke and poor visibility.

When traveling by ground, the wildland firefighter’s vision may be obscured by smoke; using a TIC can help identify safer travel routes based on terrain or fire movement. Ground crews equipped with TICs can closely monitor fire conditions in their immediate area and provide more localized, advanced warning when necessary. Using a TIC gives wildland firefighters the added reassurance that they are not missing hot spots that could prove a threat to residential areas or to themselves. A few years ago when my friend was working a wildland fire (without the aid of a TIC), homes that appeared to be untouched by the fire were burning a day or two later. A TIC might have found these hidden fires, saving the homes.

When firefighters travel by ground, either in a vehicle or on foot, their vision may be obscured by the thick smoke of the fire. Wildland firefighters have told me that they have no visibility in front of or behind them when traveling in a vehicle. Some have described their vehicle as looking as if it was covered by a black sheet. A TIC might be a huge benefit in this situation. Using a TIC from a vehicle can assist the driver in navigating safely through the thick smoke. Just remember, a TIC cannot see through glass-in this case, a windshield.

If traveling by foot, firefighters can use the TIC to help identify safer travel routes based on the terrain or fire movement. For instance, when searching for hot spots without the use of a TIC, firefighters have to crawl through or stir the brush to find hidden hot spots, which can be time consuming.

TICs also provide an effective means of night vision. Since the TIC does not register light, its picture is consistent regardless of daylight conditions. This can extend firefighting operations and enhance crew safety by improving accountability and providing views of surrounding terrain and potential escape routes.

With the enhanced visibility that thermal imaging provides, wildland firefighters can be placed in key locations where control lines must be constructed. Proper placement enhances the ability of firefighters to protect exposures including structures, threatened habitats, and critical infrastructure. Equipping ground crews with TICs can give them the ability to monitor fire conditions in their immediate area, providing more localized, advanced warning than might otherwise be possible.

The use of TICs in wildland firefighting operations offers firefighters many advantages, but be aware that thermal imaging technology is not a replacement for basic firefighting tactics. There may be times in mop-up when a TIC cannot detect a hidden heat source, such as when the heat exists deep within a tree trunk. There may also be times when the image on the TIC appears inconclusive to the firefighter.

Wildland firefighter safety and effectiveness can be greatly enhanced with the use of thermal imaging technology, but never abandon basic firefighting skills. When the TIC is not providing as much information as you need, be sure to rely on traditional techniques.

Carl Nix is a 30-year veteran of the fire service and a retired battalion chief of the Grapevine (TX) Fire Department. He serves as an adjunct instructor for North Central Texas College and a thermal imaging instructor for Bullard. Nix has a bachelor of science degree in fire administration and is a guest instructor for Texas A&M Engineering Extension Service’s (TEEX) annual fire training in Texas.