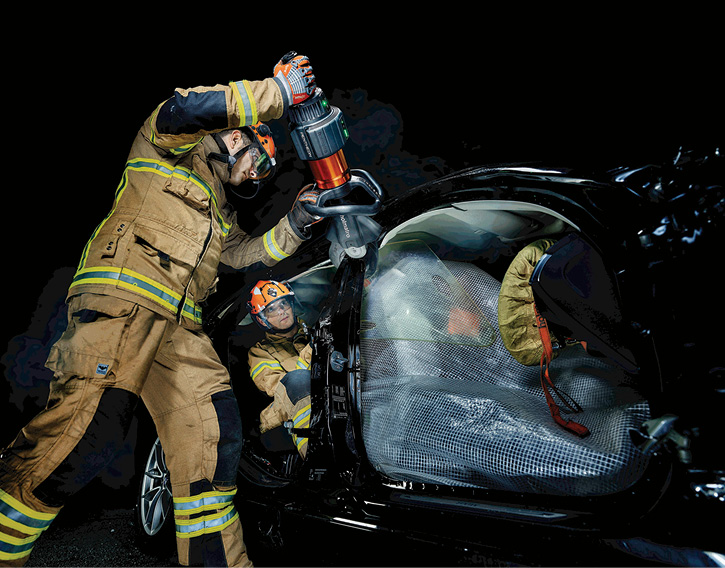 Canon points out that the new tools are more than three inches shorter than their eDRAULIC 2.0 counterparts, “providing the tools additional maneuverability in confined spaces. Additionally, the use of a brushless DC (BLDC) electrical motor in HURST Jaws of Life EWXT products offers longer battery runtime.” He notes that in testing, HURST “got up to 54 cuts with the second largest cutter we offer, and with our SP 555 Spreader, we got 75 spreads on one battery during testing.”

Holmatro has just introduced the PENTHEON series of battery-powered hydraulic rescue tools, says Dan Crowbridge, Holmatro’s rescue and training consultant. “We designed and patented a mechatronic stepless hydraulic pump that acts like a car’s automatic transmission compared to a manual transmission.” He notes that previous pumps have switchover valves to change from volume to pressure flow. “This new pump switches to the demand for flow and pressure based on what the tool tells it that it needs,” Crowbridge says. “As the tool meets resistance, or resistance goes away, the pump automatically regulates the flow with no hesitation.”

2 Holmatro makes the PENTHEON series of battery-powered hydraulic rescue tools, including the Cutter PCU 50, which has an inclined head. (Photo courtesy of Holmatro.)

Crowbridge points out that the new tools have a two-speed control handle for slow speed and fast speed modes and can be charged on the vehicle. “There’s a magnetic connector on the truck that can charge two batteries,” he says. “The charger can take a lithium-ion battery from no charge to full charge in 45 minutes. We also designed a curved battery to reduce the overall shape of the back of the tool. The battery wraps around half the tool like a bracelet and snaps in and has larger battery cells that don’t heat up as quickly as smaller cells, allowing you to draw more energy from the cells and create more use.” The PENTHEON series tools include the Cutter PCU50, which has an inclined head; the Spreader PSP40; the Combi Tool PCT50; and the Telescopic Ram PTR50.

Amkus Rescue Systems has introduced an additional line of iON tools that use the DeWALT FLEXVOLT™ battery platform, including a 32-inch spreader that can expand to 40 inches using Amkus extended-reach tips, a seven-inch opening cutter, and a combi tool that has removable tips for straight blade cutting and spreading. “These tools are built at Amkus, which the original tools were not, although many of the components were,” says Chuck Sheaffer, Amkus sales manager. Now the Amkus line includes the iTR230 Ram; the iS320 spreader, the iS280 spreader, and the iS240 spreader; the iON iC550 cutter and the iON iC750 cutter; and the iCT516 combi tool and the iCT716 combi tool.

“The 60-volt battery operates iON 2.0 tools and will also power both 60-volt and 20-volt DeWALT tools,” Sheaffer observes. “It is the only battery that automatically changes voltages when you change tools, so you can share batteries between iON 2.0 tools and other tools like saws and drills. And, our cutters and combi tools have lighted, rotating handles that keep the user from having to change hand position on what is usually a standard D handle.”

“On our C236 and C195 cutters, we have replaceable blade inserts,” Klaus points out. “If the cutter comes up against a super hard material, the insert on the blade chips off, as it is designed to do, to allow the blade to continue to slide smoothly. Our 11C and 17C combi tools have removable tips that allow the combi a straight blade cutter as well as tips for forcible entry and confined space operations.” He notes that the E-force 2.0 ram has four options: Two are push only, with one of them offering telescopic ability, and two are push-pull versions, of 31 inches and 41 inches. “All our battery-operated tools can use Milwaukee Tools 28-volt batteries,” Klaus adds, “as well as our own private label 28-volt lithium-ion batteries.”