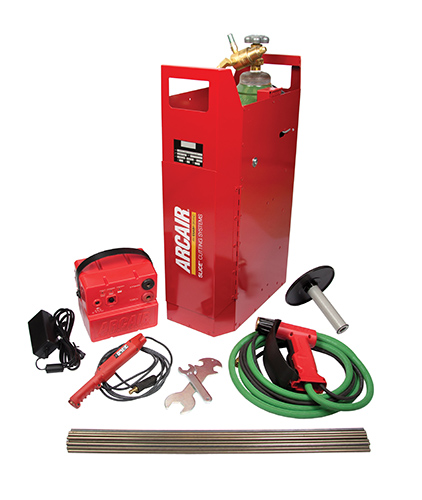 Denton, Texas – Arcair, an ESAB brand, has completed a major upgrade to its SLICE exothermic cutting system. Improvements include a more ergonomic torch grip and oxygen flow lever, as well as a better connection between the grip and the rubber shield that protects the operator’s hand from molten spray when piercing. To extend striker life, the new striker assembly incorporates a slide mechanism that enables the operator to expose the copper ignition bar in small increments, shielding the fresh portion. Arcair improved the battery ignition source for faster recharging of a dead battery and incorporated an over-charging safeguard and a better visual indication of battery condition. Lastly, the SLICE Battery Pack and SLICE Utility Pack options now come in a heavy-duty black plastic case with molded-in storage compartments and instructions inside the lid.

Exothermic cutting uses a stream of pure oxygen and a consumable steel rod to create an 8,000 to 10,000 oF flame that cuts, burns or pierces virtually any metallic, non-metallic or composite material, including steel, aluminum, concrete and firebrick. Once ignited by a spark from the striker, the patented SLICE cutting rod sustains the burn without constant electrical power.