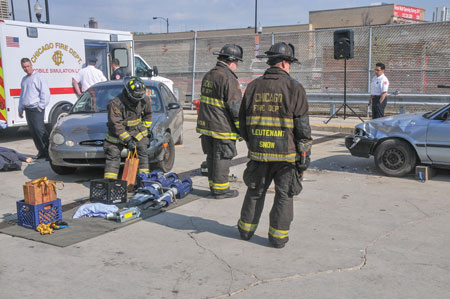 The Chicago (IL) Fire Department (CFD) Bureau of Logistics has outfitted the department’s truck companies and heavy rescue squad companies with $2 million worth of Hurst Jaws of Life eDRAULIC battery-operated rescue tools, thanks to the timely receipt of a federal grant.

“This was the largest rescue tool acquisition that we had made in a long time,” says Paul Foertsch, district chief in the CFD Bureau of Logistics. “It was important that we do it all at once and get the new tools to every truck and rescue company instead of buying rescue tools piecemeal over different time periods.” Foertsch points out that it took a couple of years for the CFD to get the federal grant that paid for the equipment, but once the finance division secured the $2 million in funding, he made the request for Hurst’s eDRAULIC rescue tools.

Foertsch says that the CFD replaced hosed hydraulic Hurst rescue tools with the eDRAULIC sets on each of the department’s 61 truck companies, its four heavy rescue companies, and in special operations pod containers. The heavy rescue squads also received the combi tools, generators, and electrical reels. He notes, “The generators and long electrical cords for each squad are there to be used in case of long extrications where the eDRAULIC batteries might get depleted.”

The CFD’s four heavy rescue squads had been outfitted with an earlier version of the Hurst eDRAULIC tools, Foertsch notes. “The ability to put three tools to work on an extrication at the same time is a big advantage,” he says. “Everyone can be working simultaneously with the eDRAULICs, which we couldn’t do with hosed hydraulic rescue tools.”

Michael Canon, Hurst’s director of sales, says the Generation 2 eDRAULIC tools are powered through a hydraulic pump with a reservoir and hydraulic piston that’s connected to a small motor, but the battery has been changed to a lithium ion model. “Prior versions were powered by nickel metal hydride batteries,” Canon says. “Generation 2’s five-amp-hour battery has an 80 percent longer run time than the previous generation, which means firefighters can do longer rescues without resorting to a battery change. They can easily take two cars apart with one battery in each tool.”

Canon points out that using battery hydraulic rescue tools allows fire departments to reduce tool deployment time at a rescue scene. “Compared with a traditional hosed hydraulic system, rescue times have been reduced by several minutes, sometimes up to 50 percent of the previous times of deployment,” he says. “One firefighter can carry a spreader and a cutter, while a second firefighter does scene assessment, and the third brings other tools to the car’s side.”

Foertsch says that when the CFD gets a call for a “pinned-in response to a vehicle crash, we will also send an engine and battalion chief in addition to the truck and the squad. The engine drops lines and pulls out Ansul fire extinguishers, but the truck and squad have the primary duty for extrication and emergency medical services care and then hand the patient off to the ambulance.”

Foertsch says that the CFD received the Generation 2 eDRAULIC tools in June 2015 and then had Hurst run training classes. “The training took about 30 days to get everyone through,” he says. “We ran the companies through the training at a couple of different sites, with both morning and afternoon classes. Once training was complete, we started deploying the tools.”

He adds that in the past, the CFD didn’t have brackets for its hosed Hurst hydraulic tools, but that the Generation 2 eDRAULICs are mounted in brackets on the rigs. “The majority of them are mounted on pull-out trays on the trucks and squads,” Foertsch says, “but our three new E-ONE tower ladders have pull-out tool boards that hold the eDRAULIC tools.”

Response from firefighters using the new tools has been excellent, Foertsch maintains. “Our firefighters absolutely love the eDRAULIC tools,” he says. “There have been no gripes at all. I think this was the largest purchase of extrication equipment by a single department that Hurst has ever had.”

Foertsch says the changeover from hosed hydraulic rescue tools to battery-operated eDRAULIC tools “ran very smoothly, with no problems. And, I spent all but $285 of that $2 million grant, which we were very fortunate to get. Without that grant, this never would have happened.”

Service Area: Provides fire protection, rescue, and emergency medical services (EMS) in the 234-square-mile city of Chicago, Illinois, with a population of 2.7 million. The department’s Bureau of Operations receives more than 500,000 calls a year for emergency assistance and responds to fires, medical emergencies, hazmat incidents, and other emergency situations.