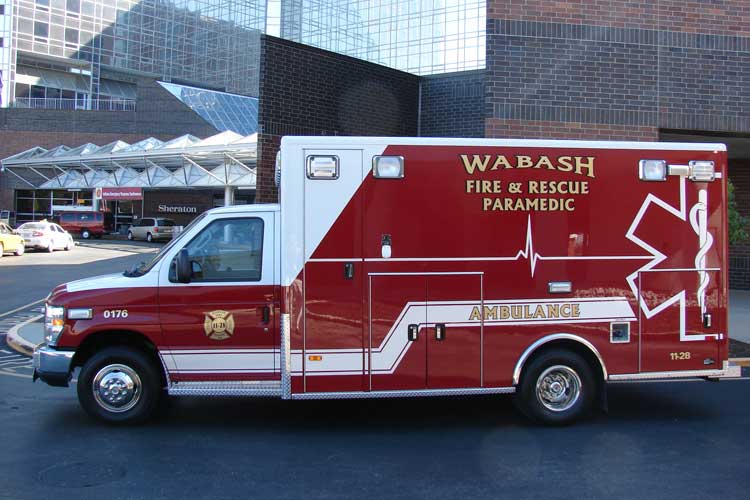 The Wabash (IN) Fire Department covers the city of Wabash and the southern two thirds of Wabash County, servicing approximately 28,000 residents in 300 square miles. When it came time to retire a 2009 PL Custom Body and Equipment Co. Type III ALS ambulance, the department chose to continue to work with PL Custom and have it build a rig to replace the one it was retiring. 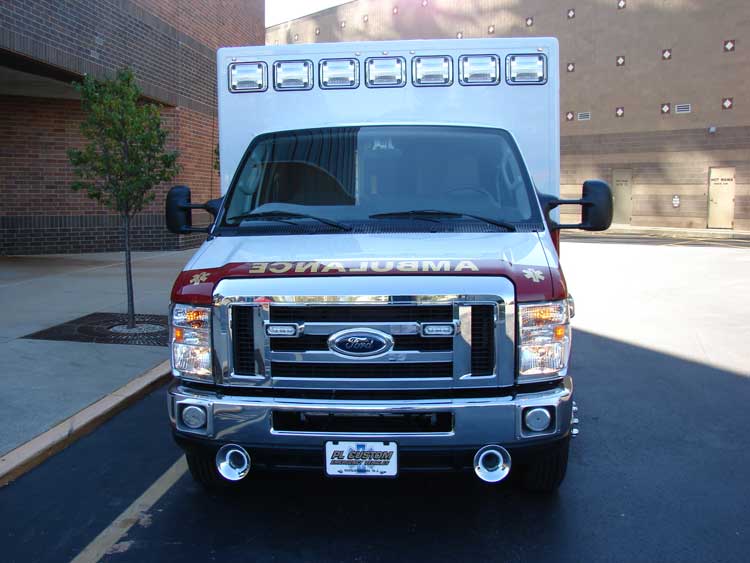 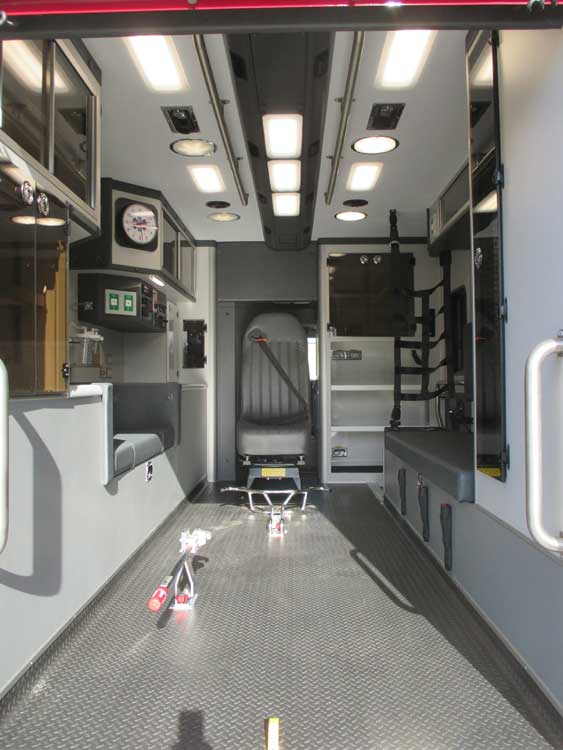 The interior of the Wabash ambulance is lit by Whelen high-load LED dome lights, and three TecNiq LED panel lights directly over the cot.

Kenny Kine, inspector/paramedic for the Wabash Fire Department, says, “We cover fire, rescue, and EMS for the city of Wabash, and rescue and EMS for the southern two thirds of Wabash County, and as a fire-based service, we carry some fire equipment on our ambulances, like SCBA, irons, and turnout gear, so we needed to increase the size of some outside compartments to have room for all of that.” 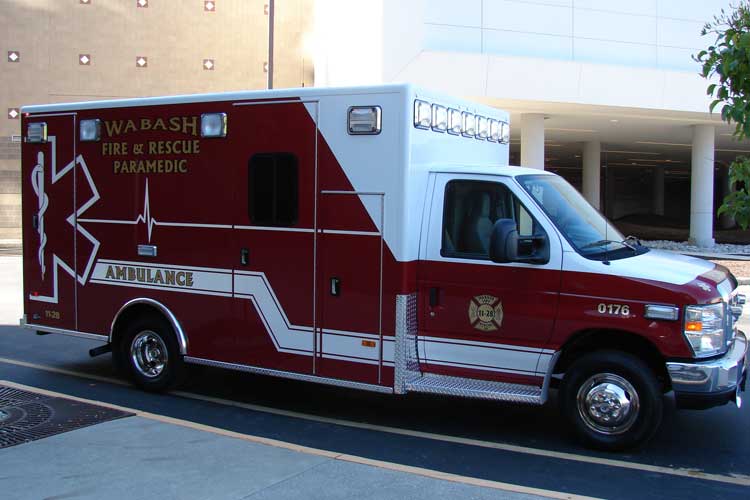 Inside the rig, Kine notes, Wabash had PL Custom install opaque doors on a couple of narcotic cabinets to prevent anyone from getting a look at the narcotics carried. “We also wanted more electrical outlets inside the patient area,” Kine says. “We got two in the action area, two where the IV pumps are located, one in the bench seat area, three 110-volt outlets in our front compartments for monitors and a narcotics safe, and four 12-volt outlets in the front compartment. Also, there is a high-end inverter on the rig to keep everything charged when we aren’t plugged into a shore line.” 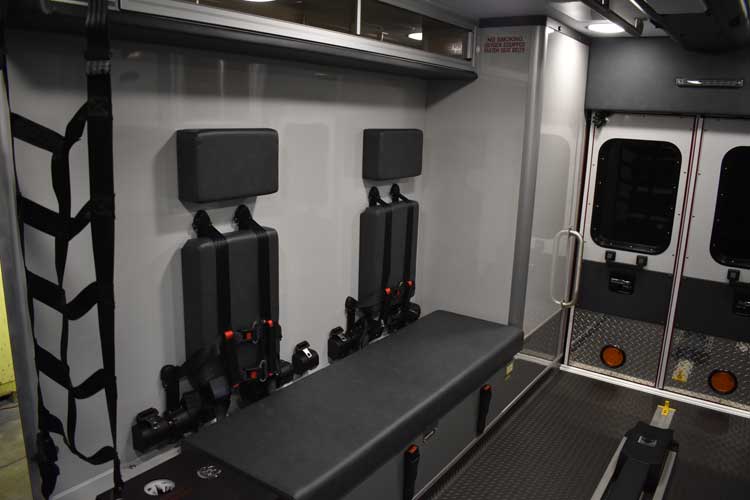 The bench seat on the curb side of the ambulance can seat two medics, each protected by a six-point harness.

Dean Martin, owner of Crossroads Ambulance Sales & Service, who sold the PL Custom ambulance to Wabash, says the department asked for a unique CPR seat that would allow its medics more room to work on a patient. “PL Custom widened the CPR seat at 45 degrees in both front and back, which gives the medic the ability, depending on the position and size of the patient on the cot, to move forward and backward in the seat, while still belted in, and to perform any functions that are needed.” 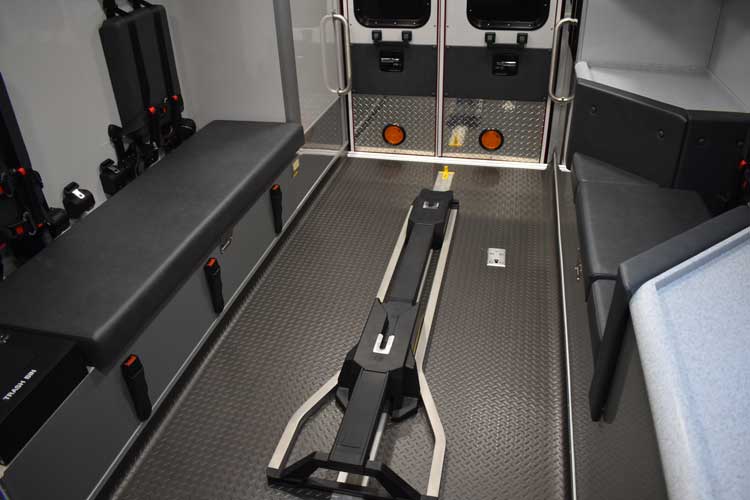 The Wabash ambulance is set up to carry a Stryker cot.

Martin notes that PL Custom “also does a good job with the upper contours of cabinets inside the patient area, putting in large radius on the leading edge of its solid-surface countertops.” 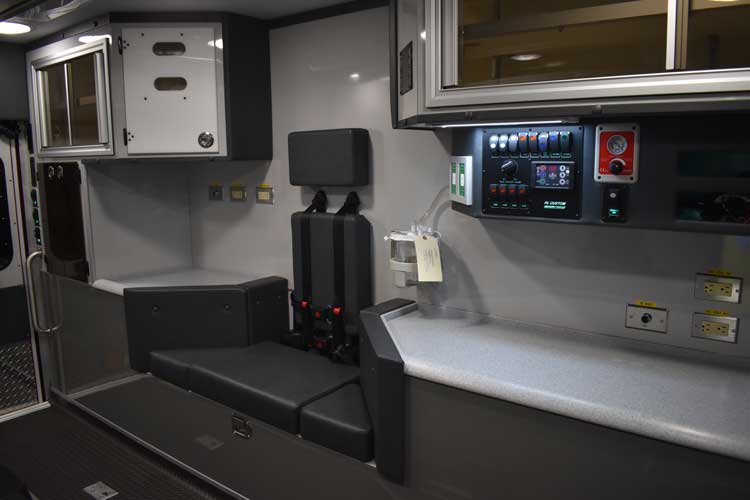 PL Custom widened the CPR seat on the road side of the ambulance by 45 degrees toward the front and back of the rig, so the medic could have more sideways mobility in the seat while still belted in.

Newsome points out that the Wabash rig has a three-point harness in the attendant seat at the head of the cot, a six-point harness on the CPR seat on the vehicle’s street side, and two six-point harnesses on the squad bench on the curb side. Lighting on the vehicle includes Whelen M series warning lights, Whelen LED 900 series scene lights, a Whelen traffic advisor at the rear, “and inside the box it’s extremely bright, with Whelen high-load dome lights, and three TecNiq LED panel lights directly over the Stryker cot,” he adds.

ALAN M. PETRILLO is a Tucson, Arizona, journalist, the author of three novels and five non-fiction books, and a member of the Fire Apparatus & Emergency Equipment editorial advisory board. He served 22 years with Verdoy (NY) Fire Department, including the position of chief.