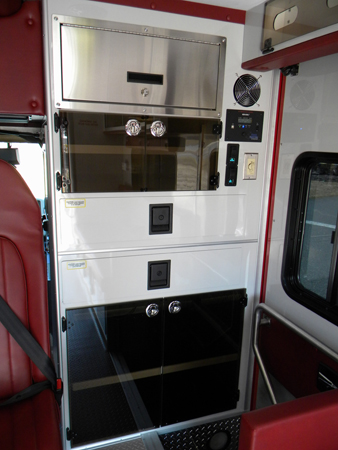 The Bel Air (MD) Volunteer Fire Department chose PL Custom Emergency Vehicles to build three Type 1 ambulances to upgrade its fleet. Bel Air opted to include a squad bench in its ambulances so their interiors were similar to other ambulances in its fleet. A medical refrigerator to handle climate-controlled medications (shown) was in the specs that Bel Air developed for its new rigs. The ambulances built for Bel Air include radiused countertops and edges, a Stryker Power-Pro stretcher, and a Zico oxygen tank lift system. Photos courtesy of PL Custom Emergency Vehicles.

Man Steals EMS Vehicle, Takes it for Joyride on NJ Boardwalk, Gets Arrested