Indianapolis, IN – FDIC 2011 will bring manufacturers from around the world to the Indiana Convention Center and Lucas Oil Stadium in Indianapolis, Indiana to profile their products and highlight the benefits of their designs and technology.
Motorola has played an important role by providing FDIC with radio products for important training exercises while continuing to research and develop by listening to firefighter voices and ideas. Motorola used their past FDIC experience, feedback from focus groups, and practical suggestions taken from active firefighters to make their products more intelligent and logical through a firefighter’s eyes.
Motorola’s product team, including engineers and designers, felt by absorbing information and ideas from those who are in the center of the attack and who have first- hand experience is the best way to improve upon the tools they use each day. Focus groups, user testing, and the use of the product in difficult conditions based on real-life scenarios are methods that help pave the way to intelligent design.

Motorola’s Human Factors Team spent time with men and women who understand what it is like to be a firefighter, what can happen during a fire, and how it feels to communicate while under harsh conditions. Research exercises included sessions that asked firefighters to build a model of a radio from simple, raw materials such as foam and felt to show what features or changes they would like to see in a radio. This method helped designers see what they really need without digging into the technical aspects of the radio while sticking to the basic needs of the firefighter.  Motorola brings this new product to the table of FDIC while standing by confidently to watch it shine through the scope of training at this year’s conference.
The APX 7000XE was first introduced by Motorola at the Association for Public-Safety Communications Officials Conference (APCO) and The International Association of Fire Chiefs Fire Rescue International Conference (IAFC/FRI) in August 2010. Motorola featured their first radio designed for firefighters and extreme conditions, by combining multiband interoperability, ergonomic design, and quality audio technology. Dropping the APX 7000XE into the hands of firefighters on the ground seemed like the next logical development step to Motorola. 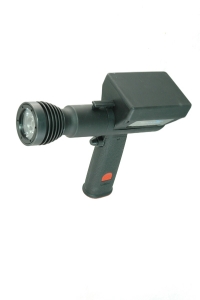 Establishing beta sites with numerous fire departments that could put the radio to the test allowed crews of firefighters to evaluate what Motorola believes is a best-in-class product. Fire departments including Indianapolis (IN), Cincinnati (OH), Elgin (IL) and the Orland (IL) Fire Protection District were instrumental at this phase of product evaluation. Elgin firefighters noted the glove readiness of the APX 7000XE as a definite benefit when working in extreme or hazardous conditions. Incorporating larger control knob sizes into the design is a simple change that firefighters suggested to Motorola during their research. “The large knobs on the APX 7000XE make changing channels and adjusting the volume very easy with gloves on. These knobs are in a class all to themselves,” said Lieutenant David H. Hudik, EMT- PRN, Elgin, Ill. Fire Department.
The radio’s audio component, including its overall output volume, clarity, and noise limiting, has also seen some updates. Motorola’s enhanced audio technology stood out on the APX 7000XE as another attractive feature for Lieutenant Hudik. “The audio is very loud and clear which makes hearing radio traffic much easier, especially in high noise environments like the fire ground,” said Hudik. Built in noise limiters, which if needed, can be adjusted by the user through the radio’s menu interface, help the unit control the level of background noise that may affect the clarity of communication between parties during an incident. Motorola’s product team confirms the APX 7000XE to have: “noise reduction software combined with the latest AMBE digital voice vocoder and Motorola’s exclusive Extreme Audio Profile to provide best-in-class audio for first responders working in extremely loud environments. A 1-watt speaker allows the audio to be heard over background noise created by sirens and tools in an emergency situation.”

A firefighter’s ability to read and understand the display on the radio is another important factor Motorola considered in its design. “The large top display allows for ease of viewing regardless if the radio is in a radio pouch on my bunker gear or in my hand” Hudik adds. The radio also has intelligent lighting which uses color to designate its status or emergency mode. This allows the firefighter to have a clear indication of the status changes at the incident, which is extremely important to any emergency responder. When the display turns green this indicates “Action”, orange designates an “Emergency”, and red tells the user that the radio is “Out of Range”. This intelligence and many of the products other features is one way Motorola can reach their ultimate goal of keeping the firefighter s safe. Most importantly, the unit’s large top display is angled to allow users to see radio status, channel or zone information without removing the radio from their turnout gear.

The APX 7000XE has a number of additional features which Motorola feels the firefighter will personally appreciate. Motorola’s specifications clearly describe the unit’s wide range of features: “The APX T-grip design provides a wide control top with exaggerated controls and knobs that can be easily differentiated by touch alone. The unit has distinct channel knob “clicks” and the volume knob has a “high resistance feel” to assure users they are using the correct knob. A push-to-talk (PTT) button designed to be extremely easy to use with gloves and can be easily located by the “ramps” on each side to also insure that the PTT button is not activated accidentally if the radio is dropped. The APX 7000XE incorporates the largest and most accessible emergency button on the market located at the base of the antenna.”
Looking towards another year and another FDIC, Motorola decided to take the next step by bringing their newest design back to the training grounds of Indianapolis. Motorola has been donating the use of radios for FDIC training for a number of years. “This year, instead of sending the same radios (to FDIC) we always send, we are sending radios that were designed and developed by firefighters for firefighters as a result of the research we do at FDIC”, said Cynthia Leighton, Motorola’s Vertical Market Manager for Fire and EMS markets. “Let the guys get the first crack at them and use them as firefighters would use them,” she said.
Motorola will conduct a number of focus groups this year at FDIC as they have in the past. Firefighters can then see instructors and staff using the APX 7000XE and participate in research sessions themselves to become a part of designs and improvements of the future. Motorola’s team is encouraging those interested to sign up for the focus groups and share their knowledge and expertise to drive new products development. “For your participation in a research session, a $50 donation will be made to the National Fallen Firefighters Foundation or to the Canadian Fallen Firefighters Foundation.” Leighton said.

Three individual focus groups types, Next Generation Communication Device, Next Generation In-Vehicle Computing, and Incident Command/Accountability Solutions will be held on Thursday, March 24th and Friday, March 25th. The research sessions will be held in the Indiana Convention Center in Motorola’s Research Room #210 where they are looking for 6-8 participants, preferably a mix of front-line firefighters, ICs and Chiefs, per session.

There they can confidently evaluate their product through situations that could establish a new level of quality and intelligent technology. The firefighters who helped develop this product through their suggestions and participation in important research can then come full circle becoming the product’s newest user.
About Motorola

Motorola is known around the world for innovation in communications and is focused on advancing the way the world connects. From broadband communications infrastructure, enterprise mobility and public safety solutions to mobile and wire line digital communication devices that provide compelling experiences, Motorola is leading the next wave of innovations that enable people, enterprises and governments to be more connected and more mobile. Motorola (NYSE: MOT) had sales of US $22 billion in 2009.