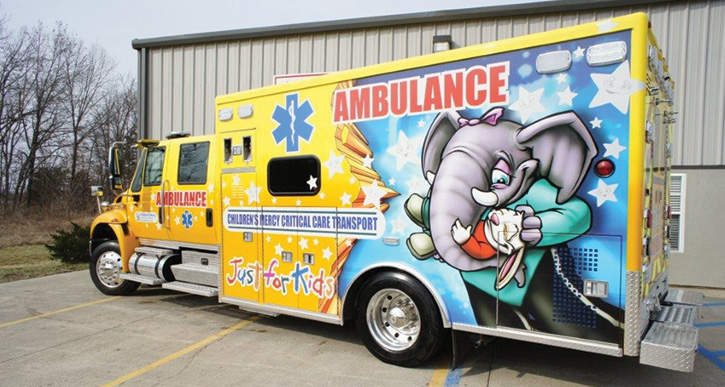 Chad Newsome, national sales manager for P.L. Custom Body and Equipment Co. Inc. (PLCB), says that with special-mission ambulances, typically his company is faced with bringing the critical care components of a hospital onto the road in the patient module of an ambulance. “The critical care market right now is an expanding marketplace with customers asking for all kinds of specialized life-critical equipment in their rigs,” Newsome says. “And as manufacturers, with all the electrical equipment being put in the patient box, we have to be very careful in designing the electrical system both for 12-volt and 110-volt components.”

Barnes says REV gets “very involved with the customer, fleet manager, oversight medical staff, and transport medics to determine what they want to accomplish with an ambulance. On the bigger type trucks—a four-door cab and chassis by International or Freightliner—they might want seating for a driver, paramedic, and two nurses in the cab. In the back they might want seating and accommodations for one or two transport incubators, a mother, a nurse, a doctor, and a respiratory therapist. Those considerations determine the length of the body for that chassis, the location of the seating, and the equipment placement.”

Chad Brown, vice president of sales and marketing for Braun Industries Inc., says Braun has been building a lot of critical care transport ambulances recently. “We’re busy with those kinds of units, especially for hospital organizations that are looking for neonatal units and critical care transport rigs,” Brown notes. “These ambulances are very mission-specific, like the neonatal units for [premature birth babies (preemies)] and infants, pediatric care ambulances, and bariatric ambulances, which may require special loading systems.”

5  The interior of a pediatric critical care ambulance built by Horton for Children’s Hospital of San Antonio (TX).

Brown notes that Braun has installed a Stryker PowerLOAD system on some neonatal ambulances because it offers a special cot that can carry an incubator. “For bariatric ambulances, we install a ramp and Mac Lift power lift and then work with either Stryker or Ferno about the special load required to be moved on the stretcher and how it would work with their lift system,” he says.

Randy Smith, director of operations for Life Line Emergency Vehicles, says that many special-mission ambulances are being fitted with video cameras to allow better communication between the rig and a hospital. “They install cameras where the patient can be observed more closely on a remote basis by a physician in the hospital,” Smith says. “Minneapolis (MN) Children’s Hospital is working on a system that uses multiple avenues of communication in a critical care transport ambulance, such as cellular, WiFi, and radio transmissions.”

Smith points out that many special-mission ambulances have redundancy built into their onboard power systems. “They’ll put in multiple inverters and chargers, a generator to take over in case they lose chassis power, and multiple air conditioning systems, especially for when they are waiting on the tarmac to transport a critical care patient.”

10  The interior of the pediatric critical care ambulance that Wheeled Coach built for Riley Hospital for Children.

12 The interior of the Children’s Minnesota pediatric trauma center ambulance.

14  The interior of the Driscoll Children’s Hospital rig.

Brown notes that Braun customizes 100 percent of special-mission ambulances for its customers. “We work with the department to identify their needs, then work with our suppliers to bring in the equipment to meet those needs,” he says. “For a critical care transport ambulance, you likely will see balloon pumps, suction units, and a lot of other technology in the module as well as an auxiliary power unit to run that equipment and the air conditioning/heating through a self-power battery source.”

Smith says that Life Line recently delivered a pediatric transport ambulance and a neonatal care unit to two departments in the Northeast. “One of them was painted with blue sky and white clouds to have a calming effect,” he points out, “while the other had 1,500 tiny holes in the ceiling with fiber optic lights behind them where they could program the lighting to simulate shooting stars and fireworks.”

16 The ceiling of the Blank Children’s Hospital neonatal and pediatric critical care ambulance has 1,500 fiber optic lights in the ceiling that can simulate fireworks and shooting stars.

Likewise, PLCB has used the blue sky with fluffy white clouds motif on the interior of a pediatric care transport ambulance it built for a hospital in Michigan. “Pediatric units tend to use a lot of vibrant colors,” Newsome observes, “because an ambulance that’s less antiseptic looking is more soothing to the kids.”

Barnes agrees on the calming effect that interior decoration can have on a young patient. “One theme that we did was a Noah’s Ark theme,” he says, “where there were cartoon animals inside the vehicle for a more subdued and calming interior and other cartoon animals as wraps on the exterior. We also have done entertainment for children with touch screens, DVD players, and video screens that drop out of the ceiling.”

Smith notes that because some premature babies “are about the size of a soda can, we are working on an air ride system that suspends an isolet for transport purposes. The system would be part of the isolet that attaches to the cot framework and would minimize shaking while en route.”

NFPA Ambulance Committee Gets To Work