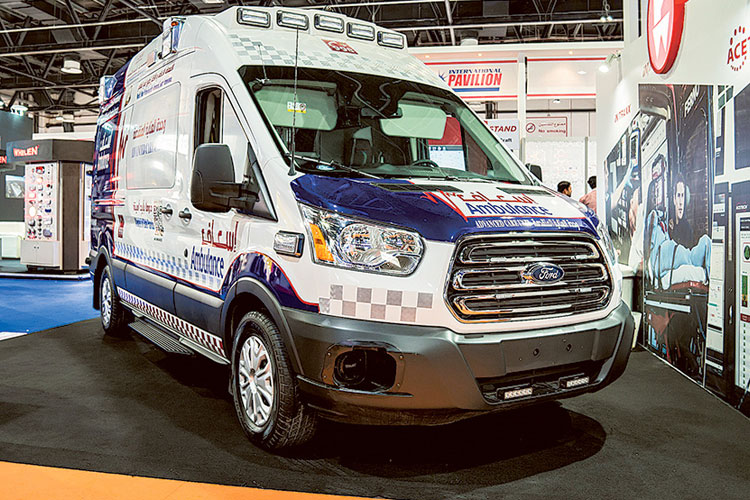 The Dubai ambulance fleet has recently been strengthened by the addition of nine brand new custom-made Ford Transit vans, the world’s best-selling cargo van nameplate with a 50-plus year legacy.

These Ford Transit ambulances delivered to the Dubai Corporation for Ambulance Services (DCAS) are the first of their kind in the world. Customized by Horton Emergency Vehicles, a division of market-leading emergency vehicle manufacturer REV Group, the interior of the ambulance is modular, and can be changed around in a matter of minutes, depending on the emergency situation.

The new Ford Transit Van ambulance is more compact than the typical box-on-a-chassis style ambulance. Vital tools, such as IV equipment, oxygen, monitors, and supply bags all hang along the side of the cabin with quick-release mounts on a track system for easy and immediate access, which makes the administration of medical attention as nimble and capable as the Transit itself.

“One of the greatest benefits of the Ford Transit IPTS (Integrated Patient Transport System) is that its design allows our emergency medical technicians to remain safely seated and restrained while performing on-route to the hospital,” said Khalifa bin Darri, CEO and executive director, DCAS. “Paramedics can be strapped into their seat, which can move forwards and backwards, meaning everything, including the patient, is safely accessible on the journey where time may very well be of the essence.”

“This partnership with DCAS highlights a growing confidence in Ford Transit, its adaptability, and its ability to become a next-generation ambulance,” said Steve Kimber, Director Commercial Vehicle and Fleet, Ford Middle East and Africa. “Custom-driven innovation is a staple of the Transit which has seen it become the world’s best-selling cargo van nameplate. Its capabilities, nimbleness, and reliability make it the perfect choice as an ambulance that not only needs to get somewhere quickly, but also safely.”