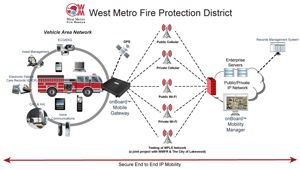 The West Metro Fire Protection District, headquartered in Lakewood, Colorado, is a full-service fire and emergency medical responder government agency that provides service to 265,000 residents in a 110-square-mile geographically diverse environment. It employs 350 first responders and 50 support personnel. In 2006, it began investigating ways to upgrade its legacy 800-MHz radio system for mobile communications to take advantage of the latest dispatch, medical device, and medical technologies. The department had two primary objectives in updating: to improve connectivity and enhance operations and assets management and to identify a “futureproof” solution that could adapt to the latest networks and technologies.

Patrick Purdy, West Metro’s IT/GIS director, wanted a communications solution that could keep pace with rapidly advancing communications technologies. He surveyed other fire departments, which were mostly using modems and integrated wireless cards. This approach did not afford West Metro with the futureproof solution Purdy sought because as technology advanced, this approach required departments to discard and replace equipment.

West Metro ultimately worked with In Motion Technology to deploy its onBoard™ Mobile Gateway, which turns emergency vehicles into secure mobile hotspots, enabling laptops, PDAs, video surveillance equipment, ECGs, and other medical devices to connect while the vehicle is in the station, in transit, or at incident scenes.

The Solution
The In Motion Technology onBoard Mobile Networking System provides organizations with secure, manageable end-to-end communications, serving all systems in and around a vehicle using multiple broadband networks. The onBoard System includes the onBoard Mobile Gateway, a rugged in-vehicle mobile router; onBoard Connection Manager, a mobile-optimized security system; and onBoard Mobility Manager, a powerful management platform. The solution deployed by West Metro includes the onBoard Mobile Gateways in department vehicles and the onBoard Mobility Manager in the enterprise. “The Mobility Manager continuously collects and analyzes information from Gateway-equipped vehicles to provide headquarters staff with a virtual dashboard of information from the field,” says Stephanie Hughes-White, public relations manager for In Motion Technology. “It works with standard Web browsers and displays complete loction-based visibility into every aspect of the mobile environment including network performance, vehicle diagnostics, and asset management on a three-dimensional map and sends e-mail alerts based on preset thresholds.”

Through Wi-Fi hotspot technology in fire stations and the Gateways on the vehicles, Hughes-White says West Metro can upload aerial and digital map information for the department’s mobile computer-aided dispatch (CAD) application. On the road, the Gateway creates and manages 3G/4G connectivity, so units can obtain CAD and incident information on the move. “This allows West Metro Fire to respond and be routed to incidents in less time than a radio-based dispatch,” claims Hughes-White.

She adds that the Gateways are equipped with global positioning system (GPS) capability, so West Metro can track its vehicles. Locations are reported back to the CAD, and using automatic vehicle location (AVL), the system can make the best recommendation for the closest response vehicles. “This technology enables first responders to shave minutes off their emergency response times,” Hughes-White says.

The Gateways can also provide mobile hotspots for other agencies. Purdy says the department currently grants access to West Metro’s Gateways to other public safety agencies if they have poor cellular or limited Wi-Fi connections.

In terms of response, when dispatch receives a call, the Gateways enable digital dispatch information that includes maps and turn-by-turn directions to the scene to be instantly and wirelessly downloaded to in-vehicle computers. Detailed incident scene information, including aerial photographs with points of access and hydrant locations, enables firefighters to plan their operations en route. “At the scene, each Gateway functions as a mobile, high-performance, wireless hotspot, providing all first responders with secure, manageable end-to-end communications, serving all systems in and around the vehicle using multiple broadband networks,” Hughes-White says. “Firefighters can begin patient care immediately and electronically send information to medics when they arrive. Medics can send ECG and other patient information to the hospital from the field.”

West Metro’s Implementation
Purdy states that the modular concept of the Gateways is how West Metro is futureproofing its cellular investments. “After researching solutions, it was interesting to see that many public safety agencies were using the ‘forklift’ strategy where they would need to purchase a new model and install it every time a new version of cellular came out,” he says.

The Gateways support all wireless networks and can switch seamlessly between Wi-Fi services, according to Hughes-White. They can be programmed to allow time-sensitive data to travel over the cellular network and high-bandwidth, but lower-priority, data to travel over less expensive Wi-Fi networks to reduce airtime costs. The system’s flexible architecture, she says, allows easy updates to the latest wireless networks while protecting the investment in onboard devices and applications.
According to Purdy, West Metro is already using many of the functions the Gateway offers, including remote monitoring, 3G, Wi-Fi, GPS, and multiple air card compatibility. “We are working on a 4G air card migration, as well as our own private MPLS network with local hotspots throughout the district,” he says. Hughes-White adds that migration to newer wireless technologies as they emerge is simplified with the In Motion’s system as one single interface is affected. By creating a vehicle area network with Wi-Fi, Ethernet, Serial, and optional Bluetooth® user interfaces, the Gateway simplifies mobile access to enterprise applications by creating a focal point in the vehicle to manage security, network performance, and new application deployment.

This project was West Metro’s first attempt at providing remote connectivity to first responders, according to Purdy. “As with any change, you have struggles, but three years into it, we have had great success,” he says. The department has retired paper map books as well as its “rip-and-run” paper report system, which to Purdy are all good things from a “green” perspective. The deployment also provides easier access to information through the Gateways and laptops. “Our next step is to use tablets in our fire and EMS rigs through a Citrix Receiver connection,” reports Purdy. So far, he says, tests are proving positive.

Tips for Deployment
Besides the normal struggles attributable to change, Purdy says West Metro learned a few other lessons. “A mobile technology solution requires dedicated power on the emergency vehicle,” he says. “We struggled with this for a while. Once we installed dedicated power to the electronics, our headaches went away.” This was key, as Gateways have sensitive power thresholds for monitoring. “If you had a power dip during startup,” says Purdy, “the Gateways would go into a reboot cycle that would take a few minutes to complete.” This reboot would disconnect the vehicles from incident information.

Purdy says a small IT team can handle almost anything remotely with minimal intervention by the staff. “A shop of one or two could handle the maintenance requirements for the Gateways and our mobile solutions,” he says. “During initial setup, I recommend a complete turnkey by an installer to get the system up and functional as soon as possible. But, maintenance is easy and In Motion technical support is great.”

Overall, Purdy cites the following as benefits of the system:

“It was initially a tough sell to our stakeholders because it was a new way of doing business,” Purdy concludes. “The successful proof-of-concept testing helped seal the deal.”

CHRIS Mc LOONE, associate editor of Fire Apparatus & Emergency Equipment, is an 18-year veteran of the fire service and a captain with Weldon Fire Company (Glenside, PA). He has been a writer and editor for more than 15 years. While with Fire Engineering, he contributed to the May 2006 issue, a Jesse H. Neal Award winner for its coverage of the Hurricane Katrina response and recovery.

Firefighters Must Be Seen to Be Safe