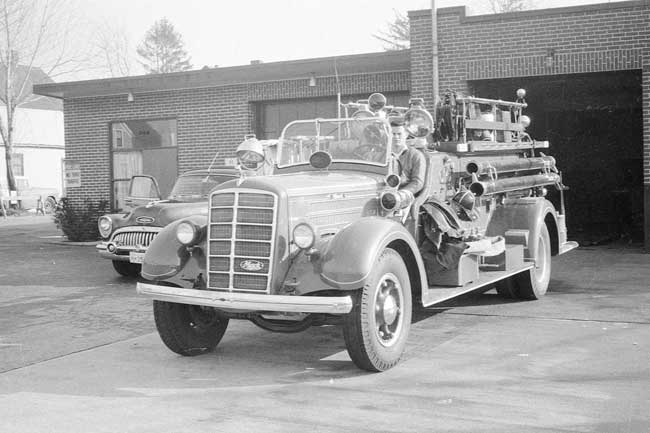 What started out as my usual crabby, cranky, and contemptuous outlook on things happening in the fire service has taken a sharp turn into stark reality. The Raisin Squad got banned from the firehouse! There is a self-expectation in the fire service that, because of the nature of the work performed, there are inherent dangers hazardous to a firefighter’s health and wellbeing. It’s getting really serious with this COVID-19 pandemic or virus, contagion, plague, or whatever you want to call it. It appears the fire service isn’t prepared to handle it.

It started out rather innocuously. The white hairs at coffee made idle comments about some “foreign disease” that was on the national news. When it began monopolizing all the local and national news, we started passing judgement on it. Our daily priorities used to be discussing what stores were giving senior discounts that day, how many doctors appointments we had in the upcoming week, harassing any active members that would listen to us, and refighting fires from decades ago.

Then we started hearing stories about career departments getting all “nervous and jerky” about their members possibly being exposed to COVID-19. It really became serious when the preseason baseball games were cancelled. Then it seemed overnight the nasty stuff started hitting the fan blades. The word came down. The fire station is closed to everyone unless there is a fire call! Morning coffee with the Raisin Squad is over—for a while, we hope. That sucks. And, it’s happening all over the country. I’ve been a member of volunteer fire departments since 1962, and this is the first time I’ve been banned from the fire station. Active volunteers (and the career staff in those companies that have them) are allowed in their stations to only answer calls. After the call is over, the volunteers have to leave.

Restaurants and business have closed; grocery stores have limited hours and empty shelves. First, the governor banned old people from going outside then he banned everyone else! Some computer-literate Raisins capable of emailing and texting have kept the jungle grapevine open, but gossiping just isn’t the same. Some of us noticed the impact COVID-19 is having on the volunteer sector all over. It doesn’t look promising.

For years, volunteer fire departments have encouraged participation and have enticed members to “hang around” their stations. Huge television screens, computers, and Internet access, exercise rooms, well-equipped kitchens, and bunk rooms have been provided. It is a small price to pay to have that first piece staffed and out the door as soon as the tones drop. Many combination departments with limited staffing and some with just career drivers appreciate having vollies around to fully crew the first rig out. They can’t be there anymore. COVID-19 is indirectly delaying the turnout time in some fire departments.

A couple departments with “spread out” response areas used to allow volunteers who lived close to an incident to respond directly to the scene. They no longer can. They have to respond to the closest fire station. The departments do not want them charging into a situation where they could become contaminated and in turn bring whatever they’ve been exposed to into their personal vehicles and more importantly home to their families.

Although this Raisin does not condone old people being volunteers, there are still a lot of them out there. Often, they’re a necessity. If there isn’t a white hair around to drive the rig, it may not respond in short-staffed (no manpower!) companies. Some act as fire police, and most are classified as exterior firefighters. Supposedly, old people are very susceptible to catching COVID-19 and possibly eating the big radish. Asking them to respond to emergencies or be around other first responders where there is a possibility of exposure should be out of the question.

By nature of the occupation, career departments, and busy ones in particular, are more prone to exposure to COVID-19. If a 3- or 4-person engine company is exposed, and they are or must be quarantined for a certain period of time, fire protection in that community is affected. If it is a small fire department running out of a single house, it’s possible all the firefighters on that “shift” may be out of service for an unknown period of time. COVID-19 appears to be some serious stuff that unfortunately the fire service has to contend with 24/7/365.

Not disparaging the seriousness of COVID-19 and to maintain the tradition of Cantankerous Wisdom, I have to report it appears the United States Navy has some pull with the media. When the news started to abbreviate the term coronavirus, it initially called it CV-19. CV-19 was the designation given to the USS Hancock, a U.S. Navy aircraft carrier with a distinguished service record in both World War II and Vietnam. The Navy got rid of the stigma of associating the virus with its ship. Let’s see if the government can get rid of the virus itself—regardless of what its called.